Unlike most other virus classifications, the arbovirus grouping is based on an epidemiological criterion—the most common route of infection—rather than on phenotypical criteria. As a result, very diverse viruses fall into the category, making it impossible to characterise the group in terms of a common clinical symptomology or shared characteristics in terms of morphology, principal host organisms, genome structure, etc.

However, the common infectious pathway does allow us to broadly characterize the geographic extension of these viruses, which depends on the presence of suitable vectors. Most arthropods require warm and humid conditions to survive and arboviruses are, therefore, encountered mainly in the tropics, where the weather conditions ensure the year-round—or at least seasonal—presence of the vector.

Most important arboviruses are naturally sustained by strong anthroponotic transmission cycles. Basically, this means that infected humans transmit the virus to the arthropods that bite them, which subsequently infect other human hosts by injecting the virus into their bloodstream when feeding. Zoonotic transmission cycles, in which wild or domestic animals are involved in the epidemiological cycle, are also common for most arboviruses but are generally less important from an epidemiological standpoint.

In the first release of ArboCat, we will limit our focus to three of the main arboviruses: dengue, chikungunya and Zika.

Global warming is broadening the geographical range of the suitable habitat for most vectors. This, together with the increasing mobility of the human population and changes in land-use and land-cover may result in the establishment of local arboviral transmission cycles in temperate regions. In fact, in southern Europe we have already seen autochthonous cases of dengue fever (France, Croatia, Madeira, Catalunya and Murcia) and Chikungunya (Italy, France). Both diseases, together with Zika and yellow fever, are transmitted by mosquitoes of the Aedes genus, whose two most widespread species are Aedes aegypti and Aedes albopictus. Ae. aegypti feeds almost exclusively on humans and is therefore the more efficient disease spreader, making it the main culprit for the huge burden posed by these diseases in tropical regions. Ae. albopictus, on the other hand, feeds less often and on a variety of host species and does not, therefore, spread disease so effectively. However, its geographical range is much more extensive than that of Ae. Aegypti, which is only found in the tropics and is very sensitive to environmental conditions. Consequently, it is Ae. albopictus that is responsible for the ongoing arboviral colonisation of temperate regions. In fact, it is currently classified as one of the top 100 invasive species by the Invasive Species Specialist Group . It was first introduced in Europe around 1979 and it is now present in the whole Mediterranean basin, as can be seen in the map below: 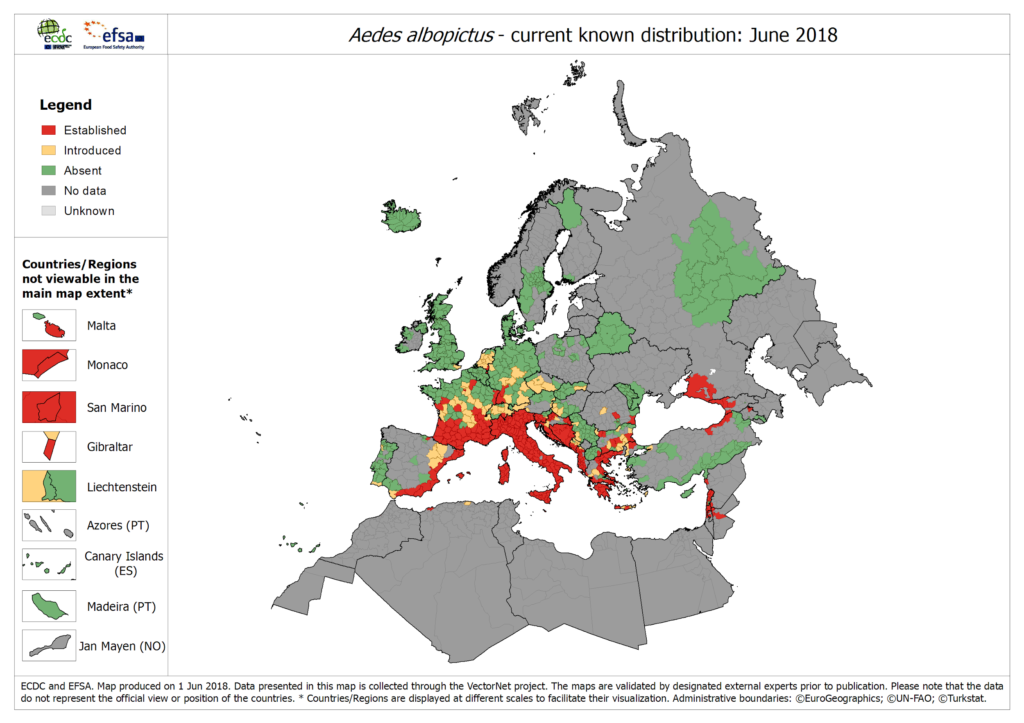 By contrast, Madeira is the only part of Europe where Ae. aegypti is present although it has also been detected once in the Canary Islands.

Aedes mosquitoes adapt very well to urban settings in both tropical and temperate zones—unlike mosquitoes of the Anopheles genus (the vectors of malaria). This adaptability represents an additional threat to our highly urbanised societies since current projections estimate that by 2050 around two-thirds of the world’s population will live in urban areas (https://www.un.org/development/desa/en/news/population/2018-revision-of-world-urbanization-prospects.html )

In summary, the presence of Aedes albopictus mosquitoes in Catalunya has opened up the possibility of an Aedes-borne disease outbreak triggered by an imported case, that is, the arrival of an infected person travelling from an endemic country. As mentioned above, the main diseases transmitted by this vector are yellow fever, dengue, chikungunya and Zika. The global burden of yellow fever has been radically reduced by the development of a very efficient vaccine. Currently only rare (typically zoonotic-borne) self-limited outbreaks occur and the chance of importation is very low. Dengue and chikungunya, by contrast, have already demonstrated the potential threat they pose for southern Europe, and the same is true of Zika, as illustrated by the 2015 South American pandemic.

Although dengue, chikungunya and Zika are not the only arboviral threats posed by global warming and globalization in Southern Europe, ArboCat currently focuses on modelling the risk of outbreaks in Catalunya of these three diseases transmitted by the Aedes albopictus mosquito species because they represent the most serious and dramatic emergency we may have to deal with. The following is a description of the principal epidemiological aspects of these diseases.

Dengue virus (DENV) is a +ssRNA virus (class IV in the Baltimore Classification) belonging to the Flavivirus genus (flavus is Latin for yellow and the name comes from the jaundice caused by viruses such as the yellow fever virus.

Five different but closely related serotypes exist (DENV1, DENV2, DENV3, DENV4, DENV5) and different combinations of the first four coexist in tropical endemic regions. An infection with any of the different serotypes is generally (iand different combinations of the first four coexist in tropical endemic regions. People infected with any of these serotypes are generally (in around 80% of cases) asymptomatic or have only very mild symptoms. In the other 20% of cases, flu-like symptoms of varying severity occur, including high fever, severe headache, retro-orbital pain, joint and muscle pain, nausea, vomiting, swollen lymph nodes and rashes (exanthem). Symptoms usually last for two to seven days, and the patient recovers fully. However, around 1% of infected individuals develop complications that lead to life-threatening symptoms (in some cases presenting as dengue haemorrhagic fever leading to dengue shock syndrome), which may include plasma leakage, fluid accumulation, respiratory distress, severe bleeding or organ impairment.

There is no specific treatment for dengue and no vaccine is yet available. Infection with one dengue serotype confers lifelong immunity against that particular serotype and temporary cross-immunity to the others. However, repeated infection with other serotypes, which occurs in hyper-endemic settings, increases the risk of developing severe dengue.

The worldwide incidence of dengue has increased dramatically in recent decades. Before 1970, severe dengue epidemics had occurred in only nine countries . Today, the disease is endemic in more than 100 countries in Africa, the Americas, the Eastern Mediterranean, South-east Asia and the Western Pacific. A recent estimate indicated that around 390 million dengue infections occur every year, of which around 96 million manifest clinically. Currently over half of the world’s population is at risk of contracting this infectious disease.

For more information visit the WHO Fact Sheet on dengue (https://www.who.int/news-room/fact-sheets/detail/dengue-and-severe-dengue), the original source of most of these data. 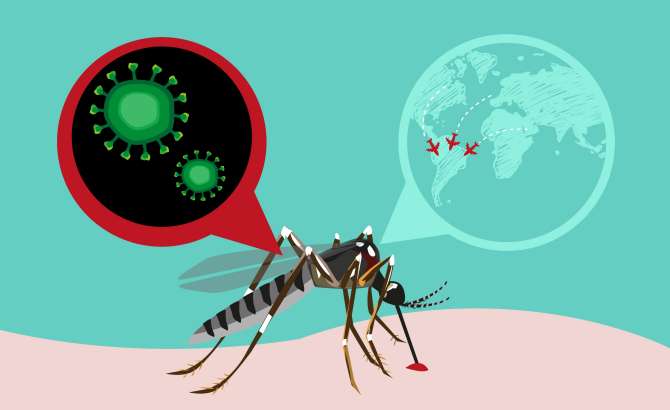 Chikungunya virus (CHIKV) is a +ssRNA virus (class IV in the Baltimore Classification) belonging to the Alphavirus genus. The word “chikungunya” means “to become contorted” in the Kimakonde language and refers to the appearance of a person suffering from very severe joint pain, the most distinctive symptom of the disease.

Unlike dengue, infection with chikungunya is generally symptomatic (only an estimated 3% to 22% of cases are asymptomatic). The first sign of infection is usually the abrupt onset of high fever accompanied by severe joint pain. Some 50% of patients present rash and other characteristic symptoms, including muscle pain, headache, nausea and fatigue. The symptoms usually last for only a few days, but in some cases joint pain can persist for months or even years. Other complications involving the eyes, nervous system or heart have been reported, but serious complications are nevertheless uncommon. Haemorrhagic complications are rare.

Chikungunya was first described in Tanzania in 1952 and the virus has spread rapidly. A major outbreak occurred in islands in the Indian Ocean in 2005, and the virus is now present in over 60 countries.

At the moment there is no vaccine or antiviral drug for chikungunya. Treatment is supportive and symptomatic. For more information visit https://www.who.int/en/news-room/fact-sheets/detail/chikungunya

Zika virus (ZIKAV) is a +ssRNA virus (class IV in the Baltimore Classification) belonging to the Flavivirus genus, like dengue and the yellow fever virus. In around 80% of cases Zika infections are asymptomatic and in 20% it manifests with mild symptoms that last for two to seven days: fever, rash, conjunctivitis, muscle and joint pain, malaise, and headache. ZIKV was first isolated in 1947 from a febrile macaque captured in the Zika forest in Uganda.

At first, it was thought to be a disease with mainly zoonotic circulation and it was not until 2007, during an outbreak on Yap Island in Micronesia, that it became clear that Zika could sustain strong anthroponotic transmission. Despite significant morbidity (three-quarters of the island’s population were affected), Zika was described as a self-limiting, mild illness with no major health consequences. However, when the virus began to spread globally in 2013, two possible complications were identified which made Zika a major public health concern. First, it was observed that a small percentage of infected individuals subsequently developed Guillain-Barré syndrome, an autoimmune paralytic disease, or other neurological conditions. Second, it was discovered that infection during certain stages of pregnancy could lead to the development of irreversible neurological damage in the foetus (particularly microcephaly).

There is currently no specific treatment or vaccine for Zika. Exposure to the virus has been observed to generate protection against subsequent infections but it remains an open question whether such protection is life-long or transient. Furthermore, there is, as yet, no evidence to demonstrate whether such acquired immunity to the clinical manifestations of the disease will protect the foetuses of immune pregnant women from developing neurological complications.

Zika is a virus that has undergone very rapid geographical spread. To date, 84 countries and territories have reported evidence of mosquito-transmitted Zika infection. For further information visit https://www.who.int/news-room/fact-sheets/detail/zika-virus

Page load link
This website uses first- and third-party cookies to obtain information on your search habits and to improve the quality of our services and your browsing on our website.
To consent to our use of cookies, click Accept or continue browsing. Accept
Go to Top